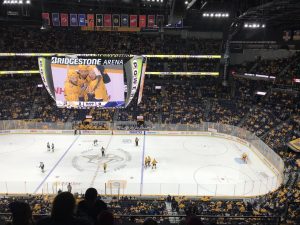 Our Nashville Predators went on a seven game losing streak after starting the season strong. It was deflating and confusing, as so much talent could not find a way to win… against good teams and bad ones. Then, the schedule presented the challenge of playing the reigning Stanley Cup Champions two games in a row, one on the road and one at home. Saturday, in St. Louis, we beat the Blues, ending our skid in grand fashion, beating the champs. Then, on home ice tonight, we dealt them a second defeat. We went up 2-0 in the first period, then slowly let them back in the game, and ended regulation tied 2-2. We possessed the puck for most of the three on three overtime, and nearly put the game away a couple of times with solid shots. But, this game was meant for more drama. The Blues went up quick 1-0 in the shoot out, but we tied it on the last of the three attempts… Then, after they missed the fourth shot, we sent our newest player in to deliver the victory, and he did.

An unsuspecting hero… a team down on its luck. We put it together tonight to hopefully get back some of the mojo that is our swagger. It’s a real treat to be a sports fan sometimes, as the life symbolism provides learning opportunities in an electric environment. Thanks, Preds!