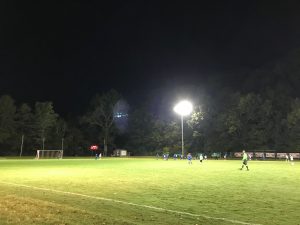 This morning, the family and I left the beach to drive home… having had three great full days there for fall break. It was a surprise trip that served us well. We returned “early,” because the high school soccer district tournament started tonight, and daughter #1’s team had a 7:00 game. Scheduling the tournament the week of metro fall break is a total failure on the part of those in charge, but, I digress.

I’ll try to keep it short, as it’s getting very late in this long day. We drove to Kingston Springs for the game, adding another thirty minutes of car time (each way), and we paid the fifteen dollars for the three of us to get in to see the game. It was one of the most epic games of any sporting event I have ever watched… AND, I have watched many. It was tied 1-1 at the end of regulation. They played two scoreless ten minute periods, and then went to a shoot-out. Each team sent the best five shooters out to face the pressure-cooked opposing goalies. (I don’t have time for details) Each team was only successful on one out of the five kicks… that’s hard to do. The goalies were successful at stopping some, and others were simply off target. Then, it went to round two of the shoot-out. In dramatic fashion, we came away victorious after the first two shooters failed, and our second player scored and the opponent was stopped by our goalie. Everyone went wild. I am exhausted.