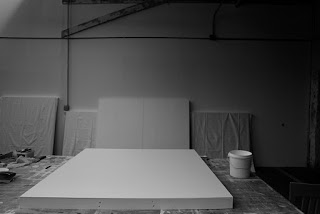 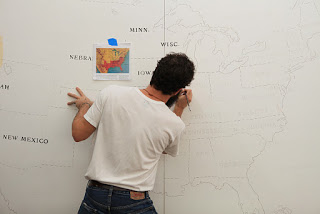 there is a cliche going around in the world of work: “work smarter, not harder.” i think that if you are a sissy, this should suffice. the new year has burned down one month so far, and the flames have been hot and bright and loud with the crackling. i have been in the studio consistently, and one more of the large panels for the Project is nearly complete. a bright idea that i had, because the Project is going to span four years, i decided that it would be wise to finish all of the paintings within the same year. if i finish one now, and one in 2015, it is likely that the style will have matured some, and the mark making may have changed. so, to hopefully keep a cohesiveness in the quality/style, i will paint each piece up to a point and then put the piece aside until the “finishing time” comes. my life has become a dream come true, as i have found means to spend the next six months in the studio working on this Project… and seeking the funding to make the studio time continue through april of 2015. i have been doing a lot of the business, and it has been slow going at times, and that speed may continue for a while, but i feel a positive direction has been forged. i began a painting today of a map of the divided united states… titled “divided.” it is 5’x6’5″, and it will be the only colored painting in the series of thirty-six paintings. to begin the painting, i am painting the names of the states (and rivers,) using the smallest paint brush that i have in the studio. it seems like a ridiculous task, but that is what has to be done. the effect will be worth the effort… the “hard work.” photoshop, and the computer can make so many art projects easier, but nothing can paint like the hand of a human. i am working hard and smart at this Project. for a favor and a little money, i painted a client’s nursery yesterday, and within an hour, i was back in the throes of the yuck that was my old job. luckily, i was finished in four hours. the format of this blog may be soon to undergo a transformation; i hope so. i am in the midst of considering my “brand”, but it sort-of seems silly, like i’m hopping on the “brand-wagon.” ? artists were entrepreneurs before entrepreneurs were entrepreneurs.