While I Was Running 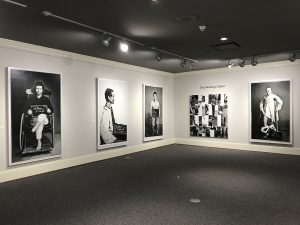 Halfway through a five mile run this afternoon, I found myself thinking a bit about the series of “wounded soldier” paintings that I did that are currently on view at the Customs House Museum in Clarksville. The first time they were exhibited, the show was titled, “War Wounds.” This time around, I needed to emphasize that the work is ultimately about healing and not strictly about the wound… so, I titled the show, The Healing Game. The train of thought on the run slammed into the simple idea that we must look at our wounds in order to heal them… if we don’t look, how will we know how to treat them, right? It seems like we are now nestled up against peering into some of our society’s wounds, and we should be, as there are some deep gashes in the flesh aching to be healed. Paces later on that run, I connected this idea to the current situation with the President, and projected him as “the wound,” and we are clearly now offered the opportunity to take a good look at it, hopefully on the path to healing. (He represents ego.)

I’m going to keep considering this idea, as there is something in it, but I haven’t yet had the space to unpack the full bag.