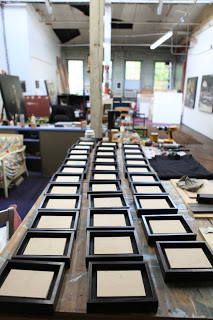 my monochromatic paintings would seem to have no relationship at all to the brightly colored pop art paintings of andy warhol… but they surprisingly do in two ways. first, he was the first artist that i had a fascination with… probably at the age of sixteen. i was not raised around much art… mostly baseball and other sports. so, the art of my childhood was the “art” that warhol brought to the art world… logos, consumer imagery, pop culture. he blew it up over the top in a symbolic gesture to what was to become of our capitalist, consumerist country… a land of commodities. he was american to the core… the second relationship that i have with that wigged master. i try to evoke my bloodline by claiming that i am lebanese/irish, but i know that i was born on this dirt and have as much american blood as other blood. coincidentally, i try to declare that my paintings are about the “human” spirit and not about the civil war… but, there really is no way to erase the historic story from the images that i employ. i am american, and so is my artwork. (i will still elect to tell anyone willing to listen that there is more to me and the work than americana… but, i know that it may not stick). anyways, i experience the warhol exhibit today at the frist center, and it was inspiring. he was utilizing so many creative voices without apologies for error. i am not necessarily a fan of all of the images that i saw today… there are lots of “misses,” but i looked past that to the simple statement of the entire exhibit. he was inspired, and he inspires.