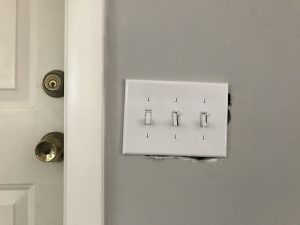 We’ve been getting close to finishing our garage transformation, and it, like most construction projects, has had it’s share of setbacks. Yesterday, after two reschedulings, the electrician came to finish his work. We had pendant, one track light, one sconce, and two can lights to install, and several plugs and light switches. Nearly every task was met with an issue or two, and then he left for someone else’s job at one o’clock… not nearly finished. I experienced several varieties of dissatisfaction. I was ready to cut my losses, hire my own electrician, fix the drywall mistakes, and move on from the contractor disaster. There is only so much ineptitude that I can handle with one person. Then, after cooling down, and seeing clearly the “right” action to take, I wrote that contractor (who has been fully paid), and I let him know that we needed him to resolve numerous mistakes.

The photograph posted above was the final breach of the unspoken contract of quality standards. This switch plate is beside the door that goes into the house from the new room… it speaks for itself. It is one of the reasons that I wanted to move on from continued contact with the contractor. He was the one that hired the subs that did this… why would I feel comfortable having him try to remedy this? I have give a couple of second chances, and I am going to trust that this last one will get everything fixed. I am done with him and ready to finish the project.

I am continually amazed at what people are capable of, and wonder how we are still the “dominant” species here.