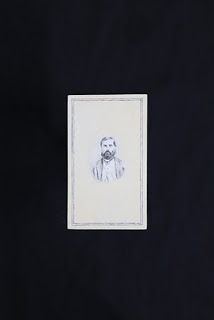 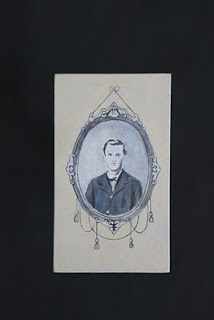 after a year of making paintings four by four feet and larger, the past couple of weeks has held me comfortably in the experience of painting tiny paintings… three and a half by six inches. cumberland gallery will be holding it’s annual “small packages” show in december, and i will have some work (like the posted, in progress images) in that show. the images are part of a series that i have been wanting to get to for about two years, but not until now have i really been able to commit to them… and, these are much smaller than i intend to eventually make them. the civil war era is so incredibly full of imagery that i sometimes have these small anxiety “attacks” about not being able to get to all of the images that i want to before my time comes to leave the body for good. being a “part-time artist” is most challenging in this way. all of the experimenting that i want to do gets postponed, because when there is time to get to the studio (between work work and family,) i feel the need to work on the Work of the day, which is not experimental at the moment. the four year project, Of Ghosts And Hopes, requires so much energy, that too much stepping out of that series seems to prolong the completion of those large paintings… and, i don’t think that i want to get too behind on such a large project. anyways, these nine small pieces that i have been doing have been a wonderful exploration of the visions in my head. i will possibly include one of the “carte de visite” images in Of Ghosts And Hopes, but it will be three and a half feet by six feet…. BOOM!