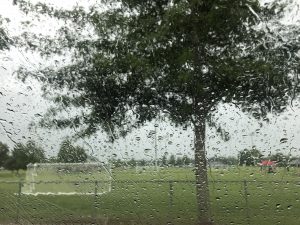 Today, the family and I took a trip to White House for two soccer games that we guessed would be cancelled due to storms. The forecast and radar showed every sign of the future, but we committed to going. The forty minute car trip ended with a light rain which gave way to thunder and lightening. Rain is ok for soccer, the other two cancel plans. So, the teams were not allowed on the field, and the start time was pushed back thirty minutes. After plenty more from Mother Nature, there was another delay. One look at the radar could have convinced any half wit to make the right call. But, this time, those in charge were witless. So, we waited…

I don’t know how much later it was, but I know I had to leave the dry security of the car to go investigate and get some answers. Some time later, the director of our soccer club had ushered in the final decision to not play, taking the kids safety into utmost consideration. The other coach and the refs were willing to play, but thunder was present, and then two close lightening strikes caught the attention of those in charge. The game was cancelled. Then, for just a moment, they debated whether or not to wait and see if we could play the second game… wiser minds prevailed. There would be no soccer today… just three hours that we can never get back.

Luckily, we were able to make the most of that time and have fun with the debacle. Also, we barely had enough players to even play the games. Seems like it’s time to reevaluate this season, though it’s hardly even started. Last week, nearly every day’s heat index led to cancelled practices. Mother Nature is in control.