the fire of a new year 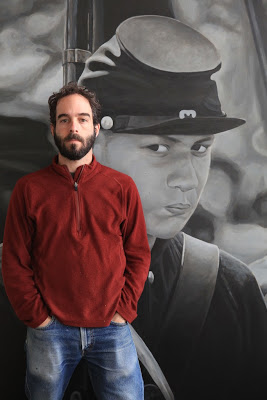 december was good.  from where i sit, january looks to prove itself even better than it’s predecessor.  i am in the studio full time working on the commission for the Music City Center, and the second of the three paintings was begun yesterday… after ten days away from the studio for the holidays.  it was not a simple task to remain peaceful and bright during those days away from the Work.  this commission, and the upcoming show at Belmont University have paved a road to goals… a road that has been extremely bumpy in the past.  never before, in my fifteen or so years of this artist’s life, have i really been paid to paint for such an extensive time.  so, i am moving confidently down that road, and the painting seems pure.  the portrait of the young soldier boy, titled (for now) The Thousand Yard Stare, is probably 93% complete.  i was surprised by the expediency of it’s execution, and i am grateful.  the third painting in the commission is sure to be a devourer of time.  with the second painting that was started yesterday, i am also creating a stop-motion photo-based piece about it’s journey towards completion… nothing like adding a project to the project.  the Belmont show is about to take over a third of the studio, as i will begin building panels and such, and they will spread out on many flat surfaces.  i am very excited to see that work start to infuse the gallery with ghosts and 19th century wallpaper patterns.  i have several meetings scheduled over the next week with some wonderful artists, and i am so grateful to be connected to these folks.  today, i will be visiting the studio of Mary-Addison Hackett.  i painted the walls in her home studio, and i have not seen how she has implemented her studio into the space.  she is a prolific, tenacious painter, and she is an underappreciated asset in the nashville arts community… an unfortunate truth that speaks volumes of a nashville tradition.  i will be meeting with John Baeder next week… a new friend of mine, and quite a witty icon here in nashville.  also, photographer Sarah Gilliam will be visiting the studio next week…  she is a spirited individual with a huge heart. there is so much more in the head to share here, but it is early on friday morning, and the daylight calls me to my paintbrushes.  i look forward to getting back here with an update.  threesquared, my gallery in the studio, will be celebrating it’s fifth anniversary with a show of Casey Pierce’s  new work on january 19th… very excited about that.  my submission for a show at the Tennessee State Museum was rejected, and i was not upset about that.  they are not really where i believe the Ghosts and Hopes series needs to be shown, i just thought that it would somehow be a good show for the community… whatever.  happy new year to all nine of you that will read this.  thank you.