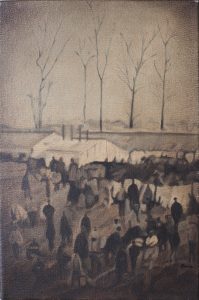 Last night, I was contacted by a couple from Memphis who were looking to get some Jim’s Spaghetti Sauce from me. He is originally from Huntington, where Jim’s is located, and had acquired my number from my mom in hopes of scoring some sauce. His wife had mentioned that they also wanted to look at my artwork. This morning, I met them at the studio before they headed back home, and they left the studio with some Jim’s sauce and art. This is a scenario that I have fantasized about for a while. It doesn’t seem like there are many “boutiques” that supply art and bolognese sauce, but that’s sort-of my plan.

The Autumnal Equinox is today, and I am hoping that this is a sign for a new season… May magic and fantasy reign.