So much. with gratitude 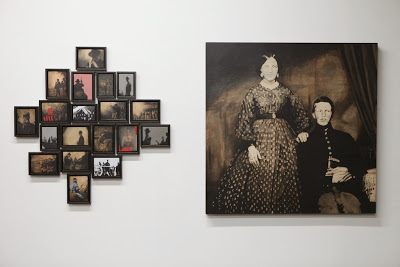 Next week, I will be shipping of tons of work for my show at the Customs House Museum.  It is the first “museum show” that I have had, and it feels good to have secured this show.  It will run from October 23rd through the middle of January.  I have been working with Civil War imagery for about seven years, and I have covered a number of bases in my quests to not simply reproduce Civil War photographs.  As I was “curating” which work would go to the museum, I decided that I would curate a show for my studio, to coincide with this Saturday’s art evening in the neighborhood of my studio.  I had a wonderful time dipping into the large supply of old and new works, large and small.  When I began this “series” (which seems to be a career’s body of work), I had a twenty to thirty year vision/projection.  Now that I am seven years in, I feel like I have hit a great stride.  The large “memorial project,” Ghosts and Hopes, has taken a backseat to the other work.  I tried for a solid year and a half to secure funding to make the project financially possible, but I did not accomplish my goal.  So, to relieve myself of the heavy weight of the self-imposed deadline, I surrendered to the idea of having no set completion date for the thirty-six large paintings.  I am working on the fifteenth painting in the series, a portrait of Clara Barton, The Angel of the Battlefield.  In about a week, she will come off the easel, and I will launch into the Work for my show at the Parthenon, which opens in March of 2015… and, my wife thinks I’m not a planner.  I have about eighteen months to create about eighteen large panels.  The show will be built around the Wounded Men images, and the 18th century wallpaper patterns… it will be glorious, I believe.  On top of all of this, I am now the gallery director for David Lusk Gallery, Nashville.  It’s a long story, but the long and short of it is that David Lusk and I will be opening a gallery in Nashville in mid-January, an offshoot of David Lusk Gallery in Memphis.  On the outside looking in, it appears to be my dream job… connecting people to artwork and artists that I appreciate.  I could go on for days, but not now.  There is much to do to prepare for the show this Saturday… the studio (427 Chestnut St. studio 223) will be open from 6-9:00.  There will be a handful of other openings and events in the neighborhood, and it will be festive, no doubt.  Thanks for stopping by.