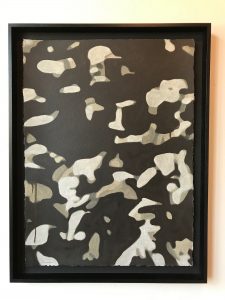 Three paintings from my Better Angels exhibit two and a half years ago will undergo some presentation alterations soon. The original experiment worked for a while, but it became obvious that a more permanent solution would be required. As they were painted, it was not clear that they could hold up as straight forward paintings, and so I added the painted veil. The idea was smart, I thought, but I didn’t solve it technically for the long run. Now, I’m not interested enough in theoretical concept behind the first idea, so I’m moving on with a simple framing of the paintings.

Everything is timed just right. Quite often, we don’t see this clearly. We hold tightly to preconceived ideas, and they build the prisons for our minds. Freedom is in Nature, the gift of surrender.