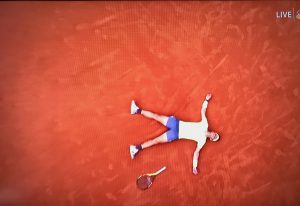 Rafael Nadal has 93 wins and 2 losses at the French Open. That is one effed up record of dominance. His mastery of the game on the clay courts of Roland Garros is beautiful, an anomaly for study. How does he succeed that often with so few missteps? I appreciate that sort of excellence in all sorts of categories, and it was enjoyable to stop this morning to watch him win his twelfth French Open (I haven’t watched much tennis in recent years). He operates like a machine on the court, going through the exact same steps before each and every serve. He’s got plenty of other (OCD) routines that dictate his time on the court, and it seems to be working out for him fairly well. I’m not sure that it will carry over with success into relationships and parenting, but, who knows, maybe he’s aced that as well.