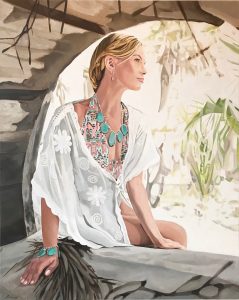 Last fall, a friend of mine brought me a page out of a magazine in which his girlfriend was the featured model, and he asked if I could paint that particular image. I confidently replied that I “could” paint it, but then recommend that I refer him to a portrait painter. Soon after that, I gave him a name or two of more experienced artists in this genre, and shared with him the pricing structure, based on size. Eventually, he plainly told me that he would rather have me do it for him… that it would mean more. It took me about a month to sell myself on the idea that I “could” produce a product that he would love (and that his girlfriend would not pick apart because of facial discrepancies). I had only done one (maybe two) colored portraits for clients in my twenty five years of painting, so, I was a bit apprehensive to dive in to this deep pool. By January, I was sweating along with the hard work of procrastination, and the start of the painting that I had stared at for weeks was no longer acceptable as progress. I committed January to an all-out investment of my studio time to this mountain… It stood large in between me and all of the other studio work that I wanted to do. I could not prolong the hard work. I could no longer tell my friend that everything was going well. Every day at the studio, I wore my tunnel vision mindset to keep me on task, as straying from the discomfort was the natural tendency. Some days, it was easy to mark the progress, and other days, I searched in vain seeking strides that I had made. Creating a little more tension was the encouragement that the client had given me to take liberties wherever I saw opportunities to be creative… as long as her face was “right.” Sometimes, this sort of freedom is a curse… opening Pandora’s Box of paint. It’s a wild west sort of grey area, having to choose when and where to follow the rules… adhering to some of them and rebelling against others, in some sort of magical balance. By the last week in January, nearing my self-imposed deadline, all the elements began to work together, like the symphony was in full swing… and, that’s when another mountain appeared: the finish line.

It took me several days of blank staring to muster up the juice to climb the last climb. Her hair needed more strands, more nuance. Her right hand, a bit deceiving in its coloration and shape, it cast me off repeatedly. My resolve rose, knowing what paradise was on the other side of completing this painting, and I stayed the course until I knew it was enough. It was a wonderful challenge, and exhilarating climb, and I am grateful for the Mountain.