Open Studio: on the other side

I haven’t done this much in the last several years… the Open Studio thing.  It’s been a good break from inviting the public into the space, and much has been gained and released.  The War Wounds show at the Parthenon came and went, and I effortfully transitioned into life after that 15 month production run.  On the other side of the large panels of wounded soldiers of War Wounds was a bounty of color… burgundies, reds, golds, pinks.  The new work finds it’s inspiration in the cases of Civil War daguerrotypes, and it takes many liberties in translating it into something freer for me and my practice.  The work will be exhibited at David Lusk Gallery in Memphis in September, and then it will travel to the Morris Museum in Augusta, Georgia at the end of October.  It’s good to have such activity, and I am looking forward to sharing the work with my Nashville friends on Friday, Aug 21, from 6-9…   I hope that all is well in your world.  Take care- 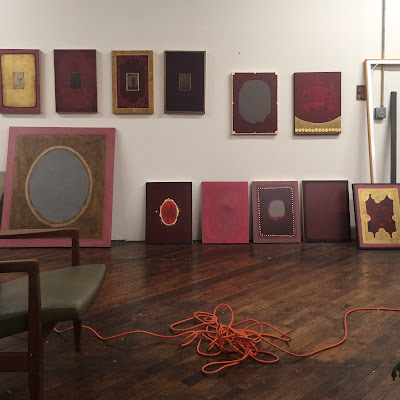