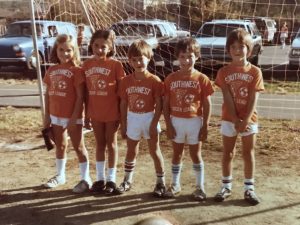 I only played soccer for one season… it was the year before I began playing football. I was on a team with half a dozen friends, many of them from the neighborhood. I don’t remember much at all about the experience, except for the fact that our coach wore a turban, and we lost every game except the very last one. Though I don’t recall having learned much at the time, Life offered a big lesson that season. “Don’t quit before the miracle happens”… before you are victorious. My family watched Rudy this weekend, and it hits on that same notion, that even after years and years of being beaten, victory can be delivered, dreams can come true. I don’t know how much fun I had losing all those games that year, but if it wasn’t fun, I’ll bet that the eventual victory was all the more sweeter for its rarity. The art world makes a habit of chewing up talent and spitting it out, snuffing out creative fires with constant whipping winds of uphill battles (yes, other professions get the same treatment). As I mentioned earlier this year, PERSISTENCE is one of the most valuable tools in the kit to “make it as a successful artist.” Without it, one is surely to quit, burying all possibility of “success,” no matter how it might be defined.

I am considering some endeavors that might resemble my affiliation with that 1-7 soccer team… I need to throw myself into some projects that are likely to see many defeats before victory arrives. I need to be more teachable, and that will require a big adjustment for me… Am I ready?