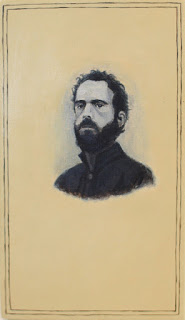 again, the business at hand seems fairly balanced. it comes and goes as it pleases, the balance, and that seems right. i painted an entire two thousand square foot house last month, and it was an enjoyable job… great clients. since then, i have found the studio in a practically perfect state for the beginning of a year-long production run that will saturate my life. threesquared will be celebrating it’s five year anniversary at the beginning of december. i may produce numerous mixed-media pieces for that event… and then give them away. also, at the beginning of december, i will be participating in cumberland gallery’s small packages show. then, in march, i will be showing a body of work at the leu gallery at belmont university… the show is titled, Proof of Ghosts. all the work for the belmont show will stem from photos of the 150th anniversary of the battle of shiloh. also, due in march, will be the commissioned work for the Music City Center. i am one of the artists chosen to be included in a wonderful collection that will adorn the new space that is set to open in april, 2014. i have not finalized the details on what i will be doing for that project, but it will be specific to Tennessee. i am still in the early stages of utilizing nineteenth century wallpaper patterns in my work, and it is a quirky, decorative breath of fresh air into the historic themes that i have been dealing with for the last seven years. last month, i sold two paintings, the first of the year… better late than never. i am also in the middle of working on a commission for a client, a reproduction of a family photo from the 50’s or so. 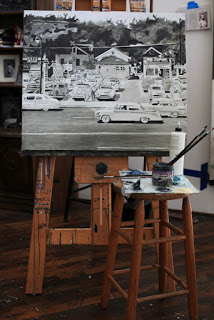 there is another commission to follow this one, and i believe that all of this will keep me occupied times nine. i’m glad it’s autumn.