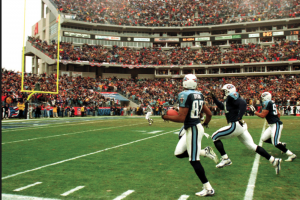 December 29, 1999, on the verge of a new millennium, I landed in jail on drinking and driving charges. This was less than a week after two attempts by family members to intervene about my drinking and life. I certainly wasn’t doing well… our new hometown Tennessee Titans were doing great.

I heard today that it was the nineteenth anniversary of the Music City Miracle, the crazy last second “Home Run Throwback” kickoff return that the Titans pulled off to beat the Buffalo Bills in the playoffs. This was en route to the Super Bowl that season for our new to Nashville Titans. The “Where were you when…” phenomena is a local bit of the Music City Miracle narrative. I am a huge fan of the Titans (I won’t go into that at this point), but I can’t recall for the life of me where I was during this unforgettable moment. I might guess the general vicinity was near “rock bottom” emotionally and spiritually. I was a twenty-seven year old, barely employed college dropout, sleeping on a mattress on the floor of a friend’s house who was possibly selling drugs and definitely making bacon every morning. The night in jail came after nearly a decade of consistent drunk driving and living part time like I was invincible and wouldn’t mind dying, and part time like I was scared to death. That I never did great physical harm to myself or anyone else is a miracle. When the wheels came off that lifestyle, I limped along through a season and a half before I eventually surrendered to a new way of living (sober). It’s absolutely a Music City Miracle that I lived through my “rock bottom,” as I imagine it is for so many others that deal with addiction, depression, etc. I am grateful beyond expression to all of the forces that conspired to assist my journey during that time, and if I can ever be of service to anyone struggling with such issues, please, let me know. We all deserve a seat at the table of Life’s delicious feast.