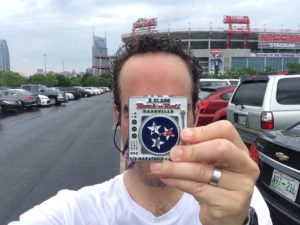 Even though I don’t really consider myself a runner, I have managed to run one half marathon every year for the last eleven years. It started on a whim, to accompany a “runner” cousin who had planned on coming to town to run the Music City Marathon. She wanted me to participate too, and it sounded like an odd enough challenge to accept. The experience of training and going from never really running at all, to running 13.1 miles, was fascinating, and the race day experience was exhilarating (side note: my cousin backed out early on during training). Every year, I follow the exact same “novice” twelve week training program, and it works like a charm to prepare me to excel at the level where I feel pushed just hard enough. Also every year, when the race is over, I go back to not really running at all… and, then, the following February, I start all over again with the training. This year, again on a whim, I started training for a “frostbite half marathon” that will be run in early February… the intensity of this adventure has a strange appeal. Last weekend’s “long run” was a seven mile run, and it wasn’t so easy. I had eaten an Indian feast the night before, and simply didn’t seem ready for seven miles. What was most difficult was mile two and three, which is not really surprising. The first mile is often a little uncomfortable, as the body adjusts to all of the new input from running. Occasionally, miles two and three are where serious resistance shows up, and the mind begins to doubt and question the prospect of finishing the day’s course. Reasons rain down for quitting… maybe, postponing till tomorrow. Who’s keeping track anyway? Would there be any substantial consequences? Certainly, it wouldn’t matter much. But, what if freedom from the difficulty is just a mile away, eight minutes… Wouldn’t that be worth fighting for? It’s so easy to quit. Is it possible to achieve a long term goal without defeating the challenges of the daily work? I know, it’s not possible to run seven miles if you quit after mile three.