Many Mini Men of War 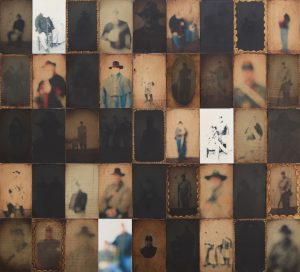 One way to deal with loss is to never really let go. That is the way of the Civil War reenactor. That was my way for a long time after my father died. I just simply wanted to keep him alive in some way, and it eventually proved an impossible way to continue living, and so I let it go. Sure, there’s still a little bit of “clinging to the past,” but for the most part, the healing had to take precedent over the longing.

Several years ago, I photographed some reenactors for a series of works that specifically dealt with this notion of not letting go as a means of coping. I can’t say whether or not it was successful in communicating anything that I intended, but I was happy with some of the work that came out of it. The statement for the exhibit was memorable (but, I can’t currently place it to post here), but what does that really matter… the show wasn’t seen by very many folks, as it was in Belmont’s gallery with limited traffic. Anyways, all of everything is just part of the process… learning a tiny little bit every step of the way (if we are mindful of the steps).

I will be working on the new installation in the hall at my studio this week, and pushing the other projects slowly forward. Next weekend is the local half marathon, and I’ll be “carbing up” most of the week. I’m excited about this week and next month and this summer…