over the past several weeks, i have had the privilege of being featured on a couple of websites…
Bearings spotlighted my work and framed a bit of the conversation around the fascinating old Mays Hosiery Mill building that houses many studios, including mine.

last week, i was alerted by a friend that i had been featured on a post by Dolan Geiman.  the artist spotlight was extremely flattering and slightly humbling.  sometimes, it is unnervingly isolating to be a “studio artist;”  it gets easy to lose perspective.  i was touched by the kind words that were chosen to describe my work, and it serves as nourishment for this “starving artist.”

thanks to those who have included me in these posts.

in the studio, the work is moving forward.  the 19th century wallpaper patterns have found their way on top of a painting, and i am thrilled with the result.  i am not settled with it yet, but excited.

the 15th painting in the Ghosts and Hopes series has been started, and it is a 5’x4′ portrait of Clara Barton, the “Angel of the Battlefield.”  i am steadily moving ahead with this project, and i am surrendering the previous held notions about it’s future.  i have gained clarity on the purpose, and it feels good to let go of the expectation/ideal.

last night, i met Sally Mann, and it was an honor and a joy. 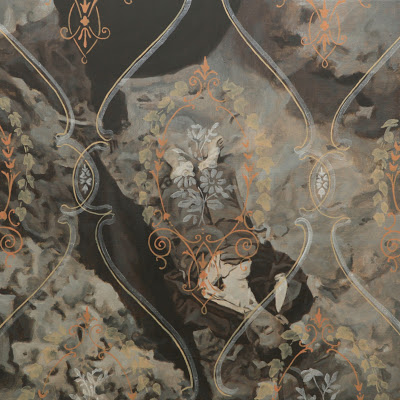