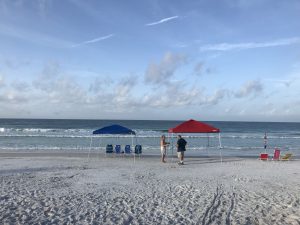 There’s a competition every morning on the beach, usually before anyone has really started their day. The “Shoreline Land Grab” is intense, and there aren’t hard rules. First come, first serve… and, it’s crowded as Black Friday at Walmart. What gets me the most is the use of tents. This was not a thing when I was growing up, and I’m not sure what the future holds for this play in the game. Where does this story end? Will we soon be constructing fences of some sort to keep others out of our claimed beach? This morning, I squeezed our four chairs in between two sets of double tents. One of these sets eventually hosted four grown ups, two per tent. Is this an American thing? I don’t want to play this game.