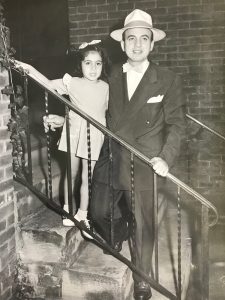 Jim Tweel, my Giddo (Arabic for grandfather), was born on this day in 1915. He was twenty-three when he wanted to marry my Sittee, who told him to get a job, or she was moving on. So, he borrowed fifteen hundred dollars and purchased Kennedy’s Dairy Bar. They sold fifteen cent hamburgers and ten cent milkshakes (or, something like that… he said it a hundred times, but I don’t remember exactly). He fairly quickly expanded the business, and in the mid forties transitioned it to Jim’s Steak & Spaghetti House. He ran a tight ship, overseeing operations until the late nineties when my mom began to take over manager duties.

“Good food, good service, cleanliness, courtesy, and ambiance” were the guiding forces behind his success. He was a hard worker, kind, compassionate, and humble. Everyone was treated equally, and they were treated like family. His authentic warmth with customers and employees endeared him to everyone he met. The example that he lived out remains a beacon light on the path of living well. I am lucky to have descended from such a genuine gentle-man. My dream is that I can help expand his legacy by bringing Jim’s Spaghetti Sauce to the masses, starting in Nashville.