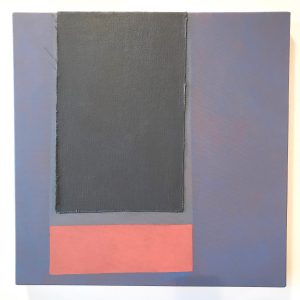 After finishing the commissioned portrait, I spent several days in the studio sinking into the meditative variety of painting… the patterned abstract waves and the haiku paintings. It asks a completely different effort from my brain, and the relative ease of this work (compared to portraits) allows my energy to let go a bit and open up different valves. A friend of mine, a couple of weeks ago, spoke about Flow and work, and was frustrated with the apparent lack of Flow during his work hours lately. He began to really question if he was truly engaged in the work of his “calling” if he was not currently in Flow when he was working. I tried to talk him off the ledge by opining that it was not reasonable to expect constant Flow while working, even when you are doing the Work that you are meant to be doing… Pushing oneself will require some sustained effort that can sidetrack Flow and it will really feel like work. I mentioned to him that I also am prone to doubt my profession as my “calling” because there are countless hours spent when I am extremely aware of the work being work, and it doesn’t always feel joyful and magic (like Flow). Sometimes, the abstract work of mine confronts me with the notion of it being trivial or trite, not as meaningful as the representational/historic work. But, when I think about being in Flow while painting, it is the abstract work, with color and pattern, that often sweeps me away into that timeless realm of altered reality. So, after the portrait, it was dreamy to catch a contact high with a couple of haiku paintings and a couple of patterned pieces. At the end of last year, I thought that I would swear off doing any more of these for a while and commit hard core to the Re: The Reconstruction series, but I don’t need to be that black or white… no hard rules in the studio. I’m going with the Flow.