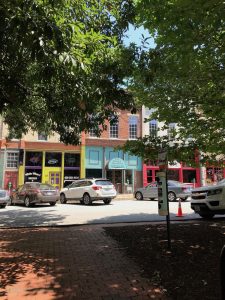 I lived in Chattanooga from January 2003 till May of 2003, above the French Quarter Hair Salon. My brother was living there at the time, and he brought me in for an enormous artistic tile job in a client’s master bed and bath renovation. Previously, I had done one other tile job. He “hired” me after local tile guys said “No.” It was an over the top vision that my brother had that stretched the notion of how tile could/should be used. I, as an artist and not a tile person, was naive and optimistic about getting the job done. It was a beautiful and strange experience, maybe one that I’ll discuss more later… maybe not. I have fond memories of that time, as I had just started dating the woman that became my wife. And, I was fully employed for consecutive months. Time is weird. The past is fascinating.