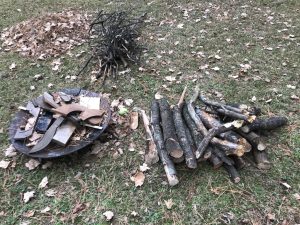 Ultimately, I’m a city boy. Not that I was raised in the big city or anything like that, but I never learned to use a chainsaw or a tractor or any similar rural/farm skills. A couple of years ago, I bought a chainsaw to help turn the tides of that lack of useful knowledge that had been passed down to me. Since then, I have operated the chainsaw successfully several times, but I’m still not smooth with its operation. Just yesterday, I needed to clean up some dead branches, and was going to build a fire with the wood. I started with my hand saw, but quickly realized that the job was larger than that manual tool would make efficient. So, I pulled the dormant chainsaw out of the shed, and did my best to bring it up to season… Clumsily, but not spotted with error, I readied the chainsaw, and before long had cleaned the branches easily. Then, it seemed the next best thing to do was to split the larger logs to make them better to burn. I had also never split wood… just haven’t found myself in a situation that called for that. I have a small axe, and after a little learning curve, I had made my way through the batch that needed halved. It was a perfect winter chore, and the grey day set a perfect stage for the task. I may always be a city boy by birth, but I’m intent on continuing to build a set of skills that makes me a more well rounded man and father.