Take It, Make It Your Own

It is no coincidence that Christmas falls around the Winter Solstice.

What percentage of humans still celebrate/honor the Solstice? Maybe, next year, I’ll bake gingerbread cookies in the shape of the sun or something. Nature was here first. It is the original God. Amen.

Finally, I decided on the title for my upcoming show at Red Arrow Gallery. In the big picture, it doesn’t matter one bit. The show could be called, New Paintings, or just Paintings… I could go the ridiculous route and title it some pretentious bullshit, like, The Fabric of Seeing  What is Fractured and White and How it Heals Us. So, like so many things, it doesn’t matter. I’ll just be glad when it has come and gone, though I do look forward to the opening, and I really hope to see lots of friends there.

I am simply ready to be fully engaged in Jim’s, and that won’t really happen until the holidays and art show pass. Until then, I’ll keep working to do my best on every task at hand… and, that includes about ten more blog posts to complete my resolution project. Thanks for stopping by here.

Like the infamous side dish at Waffle House, I feel a bit “scattered and smothered.” I’ll find a moment soon to restore my energy reserves, but I’m not sure when. Good night.

I am not a stellar consumer or shopper. The holidays create an environment that heightens my awareness of this fact, and I am more and more at peace with my lack of interest in the gift bonanza. My daughters will be shaped by this in some way, but I don’t have a clue how it will manifest. Celebrating Jesus’ birthday has become an especially layered event.

I returned to a mode of painting today that I had not been involved with for a while. The flow was welcomed, and the feeling was surprising. I have been painting plenty lately, but I let myself go more today, and maybe it was just the larger canvas… I don’t know. The return of the old high was a riot, and the results were helpful for my show. Now, I likely need to string together some more of those sorts of moments and finish strong.

I am going to consult on a potential art building,gallery, studio center on Thursday, and I’m eager to see what that’s about. I need to sleep. Only fourteen more posts.

Once momentum is stopped, it can be surprisingly difficult how long it takes to get the thing moving again…

So, it seems that this happens to my meditation practice all too often. Luckily, I’m far enough along on the insides that it doesn’t rattle me too much. I know that it will come back when it’s time. But, it sure is unfortunate that it goes away for long stretches.

Running Out of Blogposts

Well, there are only sixteen posts left for me and this old New Years’ resolution, and for that, I am grateful. It’s not that I don’t feel capable of posting more, but I feel like whoever might still be following along doesn’t deserve self indulgent/journal style posts that seem to seep out in this project. It did not evolve as I envisioned, and that’s how it goes sometimes… most of the time? Regardless, the future of this blog after these 365 have been done, will hopefully provide more. More what? Who knows?

It’s ten till midnight on Sunday, after I have been to a Titans’ game, my wife’s work Christmas party, the end of the season soccer party for a daughter, and had a cigar with a fire with one of my best friends. The night’s sleep awaits, and I anticipate deepness. Then, tomorrow, I’ll start a new fire as I continue the pace toward launching Jim’s. Will I do any shopping for Christmas? I’m inclined to do little of that… the pressure of presents is absurd.

Just because you can, doesn’t mean you should.

People like to make up catchy abbreviated names for places, and sometimes they just don’t work. Unfortunately, one of those, locally, is the neighborhood in which I have had a studio for nearly twenty years. Some odd years ago, people started calling the Wedgewood/Houston neighborhood WEHO. What a terrible thing to call a neighborhood. Still, people continue to adopt it into their lingo… and I continue to be disappointed in people’s decision making. Oh, well. 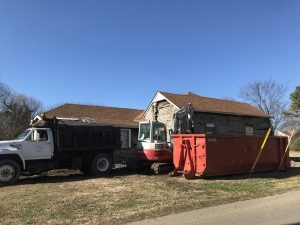 There goes the neighborhood…

Wedgewood/Houston continues to change with the city’s growth, and we lost a gem today. The little stone house on Martin Street met its demise… likely to be replaced by some generic, modern structure that houses as many families as the lot will hold. It’s too bad, as character can not be bought, and once we lose the diversity and charm, it won’t likely be restored.

Anyways, progress marches on, and loss is as common as it could be. No energy for mourning this house, but I will miss seeing it there on the corner. 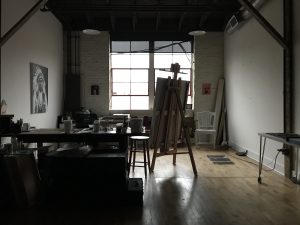 Nearly every time that I leave the studio after a day’s work, I look back (maybe wistfully, maybe deeper), at the studio and I pause. I can’t speak too well on what happens in that moment, as it’s beyond Earth in some fashion, floating above understandable words.

As I am wrapping up the Work for an exhibit in January, I glance forward to what comes next. The addition of Jim’s Spaghetti Sauce into my work week with shift the energy behind the painting, and that could lead anywhere. Personally, I am wide open to the unknown of this next season, and hope you find yourself also looking forward with excitement.