the 150th anniversary of the battle of antietam was yesterday… this photo was taken there. the title of the painting is The Truth of Consequences. 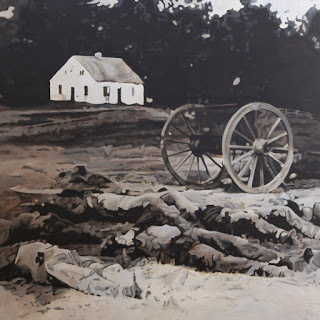 there have been numerous people to claim this is their favorite in the series… should that be read into any, with all the dead people??? whatever, i like the painting too. it was painted about two years ago, and i had a challenge on my hands as i tried to depict the corpses without simply painting dead people. i tried to abstract them enough to symbolize the decomposition that was to come to them, and also to connect them to the earth in a beautiful gesture. it is mind-blowing, the casualties of a single, one day battle (23,000.) the wounds still smart across the generations that have come and passed since.