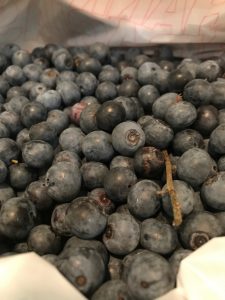 Blueberries are both wickedly sweet and delicious and supremely “good for you.” That is an anomaly of sorts, and I could not be happier about that. For the last decade, every summer, I go to Golden Bell Farms in Franklin to pick blueberries. I have had euphoric experiences entangled in those bushes, sweating and surrounded by one of God’s most delicious gifts. Two weeks ago, I headed to the farm, only to find them closed (believing that they had already opened for the picking season). In despair, I concluded that they had closed the farm for good. The last two years, they have had difficulty with production due to late freezes and such. I was saddened, but grateful that my memories of glorious experiences there were intact.

Last week, Miss Cheap published a column in the paper that included a promotion of Golden Bell Farms. After an easy phone call, I confirmed that they would be opening at the beginning of July for another season. So, yesterday, the family and I went for another lovely, sweaty harvesting of the magic fruit… and, we left with just over eleven pounds. I believe that the best way to eat them is room temperature, right out of the bag, and that’s what I’ve been doing for two days. They have also gone in some granola and on some vanilla ice cream. They will soon be transferred to the refrigerator, and maybe some to the freezer (only to preserve their “shelf life”). I hope to go back on Wednesday morning for another fresh batch. I highly recommend making your way there… crawl under some branches, and become one in the blueberries’ environment; it is a surreal dreamscape.