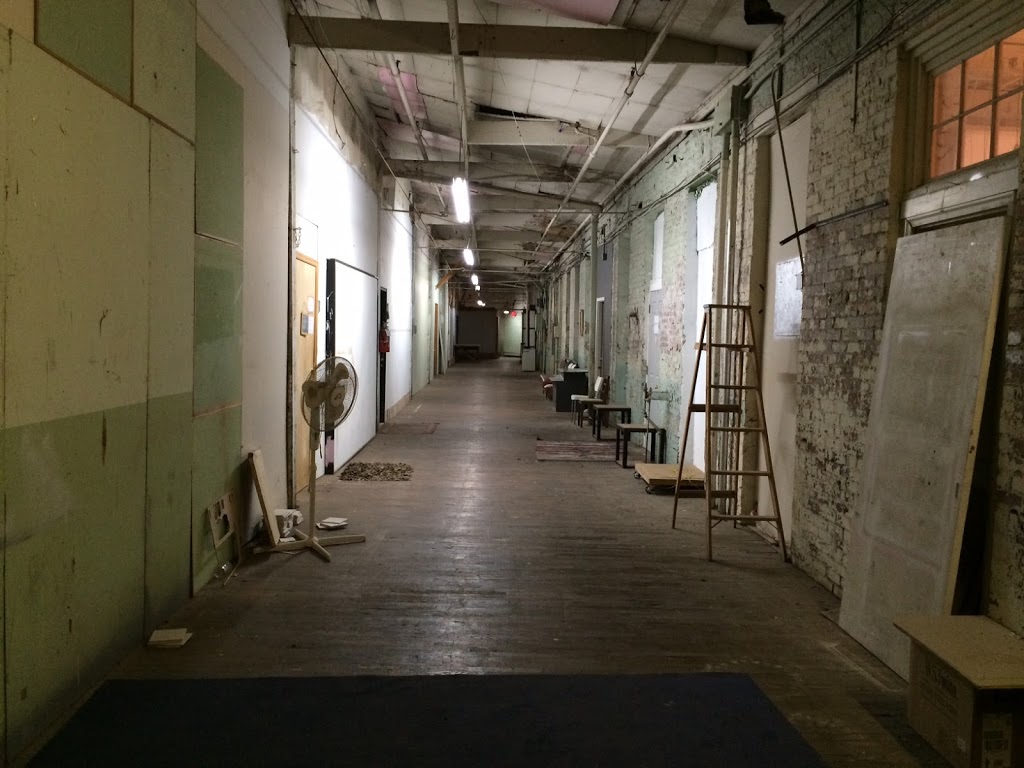 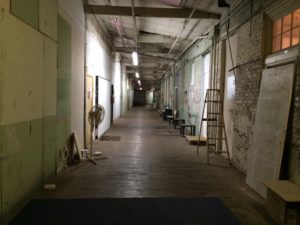 This has been my studio hall since the fall of 2000.  It’s about as special a place as any space that I have ever known (even though it really looks like a run down abandoned psych ward).  I have been extremely lucky to have been able to maintain this studio, due in large part to the low rent… due in large part to the absentee owner that didn’t do anything to maintain it over the first fifteen years that I rented it.  It has been just what I needed as an artist, and that likely goes for the dozens of others who have taken up space in the May Hosiery Mill over the last couple of decades.  I have “come of age” as an artist here.  I have made a lot of paintings worth painting over, and I have made paintings that have shown in museums.  I have cried plenty, bled some, laughed a lot, and overcome poverty, depression, and healed a nearly insurmountable wound.  I cut my “gallery director” teeth in this studio with threesquared… the little part time studio/gallery that helped spark the fire for the current gallery explosion in the Wedgewood/Houston neighborhood.  This 1100 square foot studio with a clerestory and 100+ year old hardwood floors has been my church… having saved my soul for sure.  Then, last January, the building was purchased, and the new owners spoke of wanting to keep the artists and makers, because we were the “heartbeat” of this building… and, I believed them.  Fifteen months later, I don’t think that I am so optimistic/gullible.  I knew all along that changes were coming, and with any such renovation of a large facility like this, rents would rise… my romanticized hope was that they would find a way to be true to their word.  There is not yet any word on the fate of the studios, but with an asbestos abatement coming soon, and mandatory evacuation of the building for three or so months, I don’t really see a scenario where I move back in with an affordable space larger than 300 square feet.  I’ve had a great run here, and I’d like to try to remain hopeful that something magical will happen… but, I am realistic.  The writing is on the wall of history… artists find affordable spaces in cities that no other occupation would occupy, and they toil there until the bell tolls to signal that neighborhood is worthy of investment (Hello, We/Ho).  So, what’s next?  Anxiety… a little bit.  Firstly, packing up 1100 square feet of studio is a daunting task, especially with a sixteen year history of only selling one out of about every thirty-nine created paintings.  Then, there is the question of where the next studio is going to be?  As I mentioned, I am a lucky man…  I have yet to have to deal with moving my studio.  So, I am steadfastly working on the internal transition first, allowing myself to let go of the notion that my current studio remains mine at a reasonable rate, and the leaks are fixed, and the bathroom is cleaned, and it gets heat and air… fantasyland.  Over the last year, I have readied myself for a new studio… one with a clean slate, though likely not a clerestory and 1100 sq ft.  I am likely to have an open studio soon, and maybe one last exhibit at threesquared before I have to turn in my keys.  This Life is ripe, with juices ready to flow with every bite.  Damn, I’m hungry.

(As I tire writing this, I note that I want to share more in regards to the open road ahead… it is not paved yet.)  Thanks for stopping by.