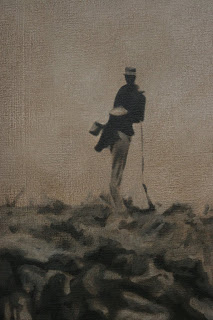 it’s now been over two weeks since i have been at work in the studio… the paycheck called out and i answered… and i believe that the last run of two weeks straight in the studio took a toll on me (this is the most intense work that i have produced.) now, i am recharged and ready as ever to continue on till the paintings are “due” on december 22nd. i have two months ahead of late nights and early mornings in the studio, and i look forward to the atmosphere, adventure, and challenge. this show is a landmark on the path of my career, even if nobody else notices.
again, yesterday, i saw a series of paintings of an “established” painter (from tennessee) who is doing some very lazy paintings (in my opinion) and passing them off as something… “finished paintings.” to me, they look like holiday inn ordered some “large abstract paintings” for their lobbies… it is a waste of good canvas. i really hope that i can avoid that pitfall in my career. i will be putting my money where my mouth is tonight or tomorrow.